The Golden Art of Whisky Alchemy – From Distillation to Cask Magic.

Whisky Gifts – Thinking Outside the Bottle 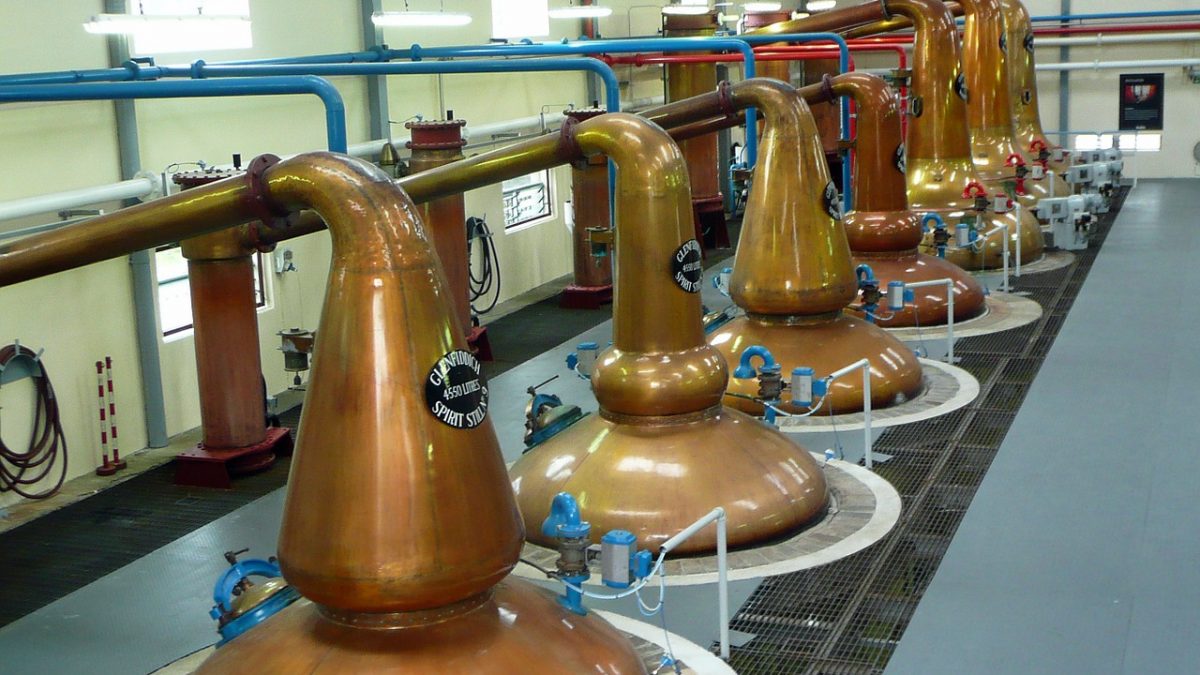 Ancient alchemists sought to discover the elixir of life, a substance that would grant the drinker eternal youth and longevity and dreamed of finding a way of making gold. Their ancient recipes all used distillation – a process used to purify liquids and separate mixtures. Making whisky uses the same ancient art of distillation. Most Scottish whiskies have a double distillation process and some Irish whiskies use a three-part distillation.

Distillation can be done in two ways – in a pot still or a column still.

Traditionally constructed in copper, pot stills are usually constructed of two parts – a bottom cauldron shaped area (known as the pot) which is heated underneath and an upper section with a swan neck for vapour to flow through, a Lyne Arm which transfers vapour into a condenser which collects and cools the vapour.

Up to the 1970s, many pot stills were heated directly by coal or wood fire, most are now heated indirectly by steam pipes. The Glenfarcas, Glenfiddich and wash stills of Macallan are the only Scottish distilleries still to use a direct heat pot still – although they have moved to natural gas instead of coal.

The process of distillation involves heating a ‘mash’ mixture – a fermented beer base with an alcohol content of 7-12% up to a boiling point. Alcohol has a lower boiling point than water and a higher evaporation rate. As the mash mixture boils, steam containing a high concentration of alcohol rises and travels up the swan neck, down the lyne arm into the condenser. The collected liquid is known as low wine and has an alcohol content of 25-35% ABV. A second distillation will further concentrate the alcohol content.

The column still works on the same principle of distillation, however, the process is run through two columns – the first known as the ‘analyzer’ has steam rising and the wash descends through several plates, the second column called the ‘rectifier’ collects the alcoholic vapour where it can condense. A column still can work in a continuous cycle, whereas a pot still can only process batches of mash.

Although the alchemists of old were not able to create gold or the elixir of life, the word whisky itself is an Anglicised version of the Gaelic term for the water of life; uisge beatha or usquebaugh.

Once the new spirit has been distilled, the next part of whisky magic comes into play – the wooden cask and the maturation process.

Barrels play a huge part in the life of whisky – the wood, the previous contents of a barrel, length of time in the cask all work together to give the final complex flavours distillers are aiming for. Some estimates place the effect of the wood barrel on the final flavour as being as high as 80%.

Hemicellulose contains 8 sugars – all of which can give a specific flavour profile; vanilla, butter, caramel, maple etc. Lingin is associated with aromatic compounds – smoky, clove, floral for example. The oak wood extractives are also essential – lactones give sweet coconut and spicier clove and celery aromas,  tannins provide some astringency, euganols give a clove/cinnamon flavour, cyclotene gives a toasty, caramel taste and hexenal is responsible for grassy notes.

Casks used for the maturation of whisky are in general made from red European Oak or white American Oak. European Oak contains more lingin and tannins and the staves are usually split instead of sawed. The actual structure of the wood tends to be less dense than the American Oak so more flavour compounds can interact with the new-make spirit. The resulting whisky usually has a spicier, more peppery savory flavour than whisky matured in American Oak casks.

Structurally, Oak is the ideal wood for cask making as it bends when heated. Wooden staves are heated using steam and then shaped by the cooper. Before the ends of the barrel can be fitted it must be either charred or toasted. This preference is determined by the distillery. Toasting means slowly heating the wood of the cask for several minutes over a flame or heating element. The heating process breaks down and ‘activates’ the flavour components of the wood such as the lingin. A high heat toasting is likely to produce smoky, mocha type flavours, whereas a low heat toast will extract more fruity, spicier notes.

Charring means setting the interior wood alight quickly for a short period of time. This produces a charred layer inside the cask which will react with the spirit once filled. Toasting penetrates deep into the wood, whereas charring is only a surface burn.

The lifespan of a cask depends on what it will be used for. Bourbon is legally only allowed to be made in first fill new Oak barrels, whereas Sherry casks can be used many times. Whisky is most usually matured in casks which have previously been used to house another alcoholic liquid such as sherry, wine or bourbon. The first time whisky is made in one of these barrels is called a ‘first fill’. After some time the casks ability to mature whisky is limited as the compounds in the wood are exhausted and used up. However, barrels can be rejuvenated by a process called STR – shave, toast, rechar. The cask is given back to a cooper who will shave the inner staves of the barrel, re-toast or re-char them before returning them to be refilled.

Although the art of making whisky is an old one, the principles of reuse and recycle are certainly modern.