Weird or Wonderful – the experimental side of Whisky

Whisky Gifts – Thinking Outside the Bottle 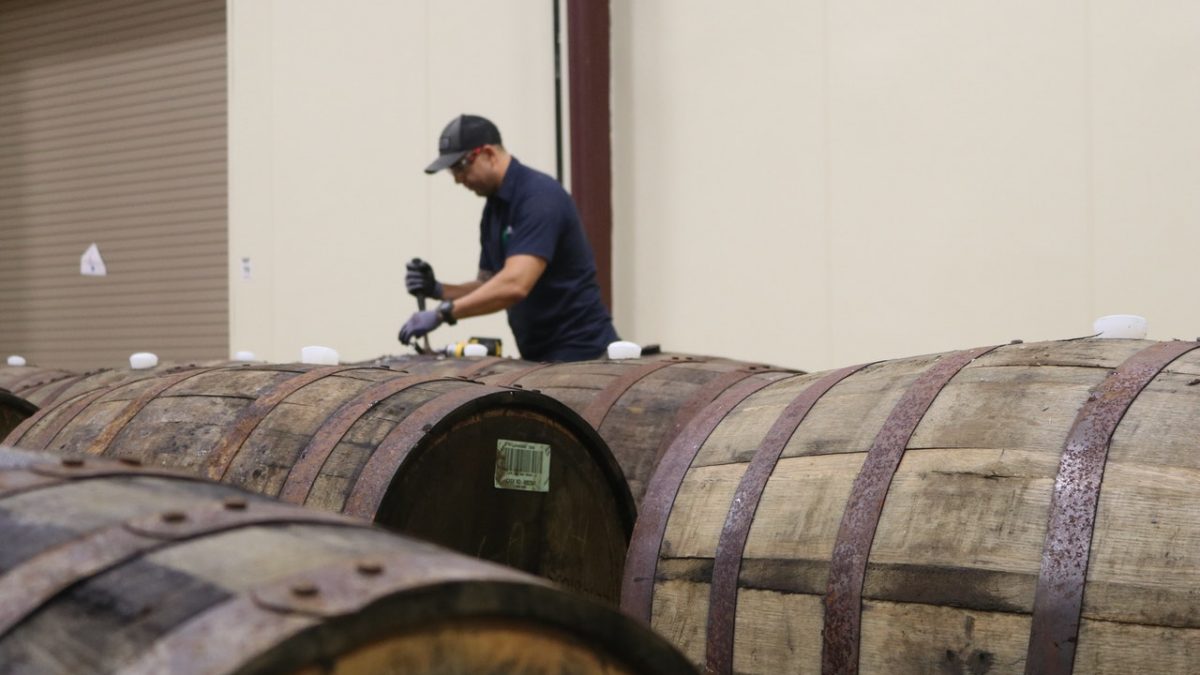 Although steeped in centuries of history, whisky is not a stagnated spirit. Distillers are always looking for ways to stand-out in this lucrative market. In this 2-part series, we bring you the best of all that is unusual. Which may help you decide where to invest your next whisky pounds and offer knowledge to impress your whisky loving friends.

All whisky starts life with a base of fermented grain mash. Traditionally, this is wheat, barley, rye or corn. You may be familiar with the terms Single Malt whisky and Single Grain whisky but may not have considered the difference between the two.

Single Grain – again the single here means one single distillery only. However, the word grain means the whisky can be made from any grain, not just malted barley. Although it says ‘single’ grain, confusingly in Scotland this can mean a grain mixed with a small amount of malted barley.

Distillers are trying different grain bases to see what impact that has on the overall taste profile. Below are some of the successful outcomes:

Usually associated with Sake, Shochu, Soju or even beer. Rice has been used as the fermented mash ingredient of choice for Japanese whisky distillery Kikori. Matured for a minimum of three years in ex-sherry casks, American oak and French Limousin oak barrels, the single-grain Kikori Rice Whiskey is a relative newcomer to the market, first distilled in 2015. The rice mash gives the overall whisky a much lighter colour and taste than traditional Japanese whiskies. Developed primarily for the US market (hence the additional ‘e’ in whiskey) Kikori is an ideal whisky for cocktails or drinkers who like a sweeter, more fragrant vanilla and melon flavoured spirit.

French brand EDDU is the only whisky made from 100% buckwheat grain. Said to provide health benefits, buckwheat, it is claimed, can help with heart problems and improved blood sugar control. Double matured in French oak casks, the taste profile is nutty and fragrant with vanilla and mixed spices.

The Koval distillery in America is the first brand to manufacture a single grain whiskey entirely from millet. An important crop in Asia and Africa, this ancient grass grain has been grown for over 7,000 years. The Koval Single Barrel Millet is matured in charred 30-gallon barrels and only uses the heart-cut (the middle part of whisky produced during the distillation process). Each barrel is numbered and every bottle produced can be traced back to its specific cask.

Koval opened in 2008 and was Chicago’s first whiskey distillery since the mid-1800s. The owners wanted to be innovative in their approach and even their name ‘Koval’, means black sheep – defining their place in the whisky market.

As well as Millet, Koval also produces Oat whisky. One of the first distilleries to try an oat mash, Koval has been joined by other players such as InchDairnie and Wachauer. Using oats as a whisky grain is nothing new – there are historical references to oat mash being used as far back as the start of the 18th Century. Once duties on volumes were imposed on malts in 1785, oats fell out of favour as they swelled to a greater degree than barley when soaked – creating more volume and therefore becoming prohibitively expensive. Oat gives a creamy mouthfeel to whisky and sweet vanilla and fresh cream tasting notes.

An important crop for the ancient Incas, quinoa is a seed rather than a traditional grain, but it can be used in whisky production in the same way as traditional mash types. Australian distillery Whipper Snapper makes 100% locally grown quinoa whisky Project Q. With a unique composition of 65% quinoa, 25% corn and 10% malted barley this is a really unusual entrant to the market. With a deep golden colour, this whisky is nutty, vanilla toned with sweet spice and caramel flavours.

This hybrid grain was bred by scientists in Germany and Scotland in the 1800s with the idea of combining the quality and high yield possibilities of wheat with the wider growing adaptability and hardiness of rye. US distillery Dry Fly produces a Straight Triticale Whisky, made from one seed variety of triticale grown on a 177-year old farm. A farm-to-bottle distillery, Dry Fly is based in Spokane, Washington. All their whiskies are matured in 53-gallon new American Oak casks and on average have a three-year maturation period. Triticale gives an interesting flavour profile – dried fruit and ginger meet oak spice and vanilla in one exciting taste explosion.

You may wish to invest in the future popularity of various styles of whisk(e)y and having an understanding of these lesser seen heirloom varietals and new grain experiments may help.

As an example; InchDairnie offers investors the chance to buy a cask of whisky with their Cask Club. The other distilleries offer distillery tours and special events where you can buy bottles.

Although steeped in centuries of history, whisky is not a stagnated spirit. Distillers are always looking for ways to stand-out in this lucrative market. In this 2-part series, we bring you the best of all that is unusual. Which may help you decide where to invest your next whisky pounds and offer knowledge to impress your whisky loving friends.

Commonly, there are thought to be eight main flavour profiles of whisky – rich and peaty, floral, fresh fruit and vanilla, malt and honey, dried fruit and nut, rich fruit and spice, maritime and smoky and peat and fruit. That sounds like a lot of choices; however, some distilleries want to push the envelope further and have developed their own unique taste profiles:

There are several ways that flavours can be developed – cask type, additives, and infusions

The Balvenie Caribbean Cask 14 is a single malt whisky that has been aged for 14 years in traditional oak casks before being finished in casks that previously held West Indian rums. The finished product is smooth honey, toffee and cream flavoured with fruity notes.

Brewed in bespoke IPA barrels from the Speyside Craft Brewery, Glenfiddich’s IPA Experiment single malt Scotch whisky is zesty and fruity. The hoppy notes of the beer really come through and marry well with the warmth of the whisky. A wonderful collaboration!

The Cactocin Creek Distillery in Purcellville, Virginia has a whole range of experimental cask spirits, one of their most popular is the Roundstone Rye Cask Proof “Maple Finished”.  The distillery purchases ex-maple syrup casks from Langston Wood and mature the rye inside these. The resulting spirit is not overly sweet but has a gentle, long-lasting maple finish. This is a win-win relationship between both companies as Langston Wood actually age their maple syrup in barrels bought from Cactocin Creek that have previously housed their Bourbon, Brandy, Rum or Rye Whiskey.

The Benromach 21-year-old Tokaji Wood Finish single malt whisky is matured in Tokaji wine casks. Coming from the Hungarian/Slovakian Tokaj wine region, this sweet wine is made from grapes affected by ‘noble rot’, matured for 6-18 months in oak casks. The whisky has ripe fruit and sherry notes with a dry smoky, spicy finish.

Most flavoured whiskies are technically liqueurs because sweeteners and flavours have been added. Depending on regulations in each country, legally some additional flavours and colouring compounds are allowed to be added into whisky. Scottish and Irish whisky producers can add caramel colouring only, Canadian whisky may contain caramel and flavouring. The addition of flavouring is allowed in blended American whisky. A flavoured whisky will still retain the ABV of a standard whisky 40% +.

Here are some of the leading flavours on the market:

Bruadar, which means ‘dream’ in Gaelic is a great match of honey, sloe berries and Scottish single malt whisky. Honeyed with a floral nose, this spirit gives a hint of damson jam and delicious berry notes from the sloes.

The unusually named Stag’s Breath liqueur has been produced in the heart of the Scottish Highlands, by the Miekles family, since 1989. A combination of fermented honeycomb and malt whisky this spirit is great in cocktails or as a sweet sipper.

An unusual leader in the US whisky market – Fireball Cinnamon Whisky from the Sazerac Company is a mix of Canadian whiskey (aged in ex-bourbon barrels), real cinnamon extracts and sweeteners. Popular for shots, this flavoured spirit is loved for its fiery flavour yet smooth finish.

Canadian liqueur makers Spicebox, are masters of blending whisky with spice flavours. Inspired by prohibition bootleggers who smuggled contraband spirit in barrels marked ‘spices’, their Cinnamon Spiced Rye Whisky marries together the traditional flavours of Canadian Rye with a hot cinnamon burn. Within their collection, they also have gingerbread, chocolate and pumpkin spiced rye whiskies.

With 13 flavours in their portfolio, Bird Dog from Western Spirits, Kentucky claim to be the most awarded brand in the flavoured whiskey market. The Maple Flavoured version of their Bourbon based spirit is rich in butterscotch, molasses and brown sugar flavours.

Knob Creek, based in the heart of Kentucky is a stand-out distiller in the bourbon market. One of the only companies to offer purchasers the chance to buy a cask of whisky from them directly as part of their single barrel experience, the distillery also offers a Kentucky Straight Smoked Maple Bourbon. The ‘straight’ part of the descriptor in the title refers to the fact that the maple flavour has been added after the distillation process, so essentially the bourbon is still pure bourbon. The smoky element to the maple is intended to reduce the sweetness, and indeed the resulting flavour is sharp and warm with a hint of oak sugar.

The drinks market is full of online tips about infusing your own gin or vodka, yet whisky tends to be less commonly recommended for home flavouring. This is probably because neat whisky already has a complex flavour profile and finding infusion ingredients to compliment and match this rather than clash with it is slightly trickier.

If you do want to try infusing your own whisky then finding a mid-range bottle, (not too cheap and not too expensive!) and research the flavour profile of your chosen spirit.

This is an area where you can let your imagination run wild. Who knows your infusion might be the next big thing in the whisky world.